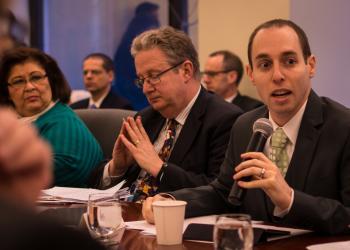 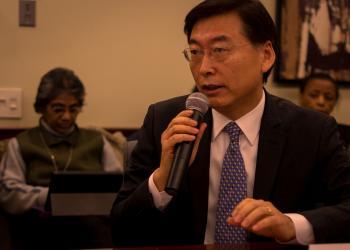 What if you had a really good plan for ending global poverty and protecting the environment but few people seemed to care?

That question is facing the United Nations right now. As one high level diplomat stated at an informal breakfast meeting for diplomats, United Nations officials and civil society representatives on 11 February 2015: “Usually with the phrase ‘sustainable development,’ it’s hard to get past that without people’s eyes glazing over.”

The meeting, which sought to examine the status of negotiations at the UN on a new set of Sustainable Development Goals(link is external) (SDGs), returned several times to the looming task of explaining the “post-2015” development agenda. This is one reason negotiators want a formal declaration on the SDGs that is “short and visionary,” said David Donoghue, the permanent representative of Ireland to the UN, who is co-chairing the negotiations.

It must, he said, “in some way capture the imagination of ordinary people around the world.”

Amina Mohammad, special advisor to UN Secretary-General Ban Ki-moon on post-2015 development planning, agreed that communicating the significance of the new goals will be critical to their ultimate success, saying they must have support at all levels, from the international to the grassroots.

“It is not just about governments and businesses,” said Ms. Mohammad, also speaking at the 11 February breakfast. “There are many more partnerships that will hold this all together.”

Both Mr. Donoghue and Ms. Mohammad said that civil society has also had a key role in formulating the goals.

“We want to hear the views of civil society,” said Mr. Donoghue. “That is an important priority for both of us for the duration of these negotiations.”

Ms. Mohammad said the strong partnership with civil society has helped create a plan with the potential to “change conceptually the way we deal with development.”

“We are saying that this is about everyone,” she said, explaining that the SDGs will apply to both rich and poor countries, and go well beyond the traditional concept of development as donors and recipients.

“This is very much a people and planet agenda,” said Ms. Mohammad, adding that the new goals promise to be “transformational,” going far beyond the anti-poverty focus of the old goals by integrating development, peace, health, and environmental issues.

Co-sponsored by the Baha’i International Community and International Movement ATD Fourth World, the meeting was the 23rd in a series that has sought to provide an informal setting for the discussion of issues related to the post-2015 development agenda.

The sponsors hope to plan a future breakfast meeting that focuses more specifically on the role of communications in winning support for and ultimately implementing the goals, said Daniel Perell, a representative of the BIC to the UN.

“Today’s meeting really made clear the ultimate importance of helping people everywhere understand what the SDGs are and what they can help us all achieve,” said Mr. Perell. “So how to effectively communicate them is a topic that must be explored further.”

During the discussion, participants at the meeting asked a number of questions and made wide-ranging observations about the SDG process so far, including among other things, the need for concrete indicators and monitoring mechanisms so that progress towards meeting the new goals can be determined and the importance of ensuring that the most marginalized and vulnerable people can participate in achieving the goals.